The use of probiotics / supplements in the world of fish farming (aquaculture) is increasingly increasing. Both in quantities and in types of bacteria. Starting from the type Bacillus, Pseudomonas, Lactobacillus to certain body parts of bacteria. Each bacterium has its own advantages. This certainly needs to be observed by the cultivators because the needs of each pond must be different. There are farmers who need to maintain the quality of pond water alone, therefore, they need to decompose the waste of ammonia and H2S. There is also a need to increase the amount of natural feed in ponds. Therefore, as a professional fishery you need to carefully select the supplement / probiotic for fish / shrimp that you keep.

Basically, the requirements of good supplements / probiotics is safe for fish / shrimp and consumers in this case people who consume fish / shrimp crops with probiotics. It must contain beneficial and resistant bacteria in all pond environment conditions and should have been produced on an industrial scale. The thing to note also is the ease in using it. It can be used easily by adding it to the fish food or just directly put certain dosage inside the water. The ease of use is greatly influence the operation cost of cultivation. If it is difficult to apply the probiotics, then the operational cost for cultivation usually remains higher. However, if the probiotics are easy to use and perform good results, it can certainly boost the production quantity and quality.

GDM Liquid Organic Supplement for Fish comes as one of the supplements for fisheries that are equipped with macro and micro nutrients essential as well as 5 species of bacteria that suit all types of water ranging from fresh water, brackish water to sea water. GDM Liquid Organic Supplements Fish consists of 3 kinds of Bacillus namely, Bacillus brevis, Bacillus mycoides and Bacillus pumilus. For Pseudomonas category,  GDM Fish Specialist contains Pseudomonas alcaligenes bacteria whereas Micrococcus category used is Micrococcus roseus.

The following are each of the five advantages of bacterial combinations in SOC GDM Fish. First, the advantage possessed by Bacillus pumilus is to produce mananase and protease enzymes (Hilge et al., 1998). These enzymes are useful for breaking down compounds with complex chains. Mananase enzymes are useful for breaking down proteins in fish pellets, increasing protein digestibility so easily absorbed by fish / shrimp. With the presence of this mananase enzyme fish and shrimp appetite will increase (Purwadaria et al., 1994). If the appetite of fish / shrimp increases, it will be followed by optimum growth so as to speed up the harvest time. And it also saves maintenance operational costs.

Second, the advantage of Bacillus mycoides is to produce enzyme alkaline protease (Indria, 2012), cellulase (Fatichah, 2011) and amylase (Liestianty, 2001). These enzymes usually function during the fermentation process. SOC GDM Fish can also be used for pellet fermentation. With the enzyme support produced by Bacillus mycoides, it is expected to increase the levels of crude protein, decrease the levels of crude fibre and improve the quality of nutrient content in fish pellets. Improving the quality of nutrients will affect the survival rate of fish / shrimp (survival rate) so as to minimize the mortality rate of fish / shrimp.

Third, Bacillus brevis has the advantage of producing enzymes alkaline protease and cellulose also produces antibiotic surfactin. The mechanism of action of surfactin is to damage the permeability of cell membranes by lowering the surface tension and forming micelles with fungal cell membrane components. So that the antibiotic surfactin produced by Bacillus brevis is able to inhibit the growth of mushroom in fish / shrimp (Huang et al., 1993). Mushrooms such as Aspergillus, Aphanomyces and Fusarium.

Surfactin is a secondary metabolite produced by B.brevis in the stationary phase. Feignier et al. (1996) suggests the genus Bacillus is generally a kooproduser of polypeptide antibiotic compounds. This statement is also supported by Nijishima et al. (2005) that the Bacillus species produce at least 66 types of antibiotics, and certain strains of Bacillus are biocontrol agents. SOC GDM has 3 strains of Bacillus antibiotic to prevent the appearance of parasites such as Argulus, Lerneae, Trichodina and Ichtyopthyrius multifilis. Antibiotics produced in Bacillus SOC GDM Fish are also able to prevent the emergence of bacteria such as Aeromonas hydrophylla, Pseudomonas aeruginosa, Streptococcus and Staphylococcus.

Fourth, Pseudomonas alcaligenes bacteria are capable of producing lipase enzymes (Sharma et al., 2001) and dexametanose (Zhu et al., 2015). Kiran and Divakar (2001) stated that lipase enzyme has a very wide use in almost all fields of industry. In the field of aquaculture, lipase enzymes are useful as catalysts in the process of hydrolyzing fat to fatty acids, glycerol, monoacylglycerol and diacylglycerols.

Finally, the bacterium Micrococcus roseus in SOC GDM Fish has the advantage of producing a natural pigment called astaxanthin (Schwartzel and Cooney, 1974) and canthaxantin (Cooney et al., 1996). Astaxanthin and canthaxantin are red carotenoid pigments (Amin et al., 2012). With this pigment, the color of ornamental fish such as koi and arowana will be brighter. Shivaji et al. (1988) added that the bacterium Micrococcus roseus can live in habitats such as fish scales, organism skin, soil and water and measuring 1.0-1.5 mm, the optimum temperature for growth is 25-35 ° C, pink colored when cultured in medium agar Triptic Soy Agar (TSA)

With the combination of 5 bacteria in SOC GDM fish, it is expected to be a solution for fish farmers both fresh water, brackish water and sea water. The formulation indeed give answer for the needs in the recent fishery situation that increasingly complex and need fast action. 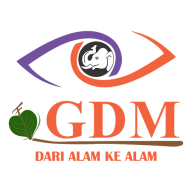